Education in the Metaverse

In partnership with
APRU MetaGame Conference 2022

The APRU Metagame Conference 2022 will examine the ways that an international network of esports leaders can further its scope within universities including edutainment, collegiate esports, and gamification of social well-being.

The APRU Metagame Conference is the spotlight event of Cyberport Hong Kong’s Digital Entertainment Leadership Forum (DELF) and is hosted in partnership with the Hong Kong University of Science and Technology (HKUST).

Level Up Our World Awards 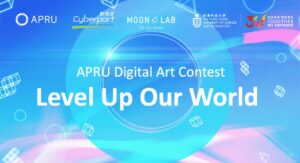 APRU invites students of the Asia Pacific Rim to showcase their digital art skills to influence the gaming industry. Students are invited to design a cast of characters and/or game bosses for their original game idea which reflect students’ vision to shape an equitable, sustainable, and inclusive world. 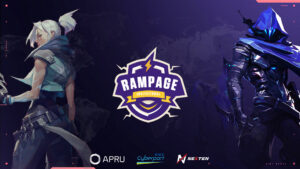 APRU invites students of the Asia Pacific Rim to participate in the Rampage Invitational Tournament to build community and connectivity through competition. In a 5v5 Valorant title, we wish to inspire students’ connectivity and support for one another.

Dr. Tremewan was elected as APRU’s 4th Secretary General and took up the role from June 2011. Before heading the APRU International Secretariat, he was the Vice-President/Pro Vice-Chancellor (International) of the University of Auckland, New Zealand. He holds bachelor’s and master’s degrees in social anthropology from the University of Auckland, a master’s degree in Public Administration from Harvard University, and a Ph.D. in political science (on Southeast Asian politics) from the University of Canterbury. He was elected a senior associate member of St. Antony’s College, Oxford University, in September 1991 from where he published the book The Political Economy of Social Control in Singapore (Macmillan and St Martin’s Press, 1994, reprinted 1996). He was a visiting fellow at Georgetown University in Washington, D.C. in 2003 and a visiting professor at Peking University in 2007 – 2008. In 1995 he became the founding director of the New Zealand Asia Institute, which he led until 1999. Previously, he held positions as a senior consultant, executive secretary, and research director for international development organizations based in Hong Kong, Singapore, and Tokyo. A specialist on social regulation in Southeast Asia, his research has recently focused on the internationalisation of higher education.

Professor Yang Wang took office as Vice-President for Institutional Advancement of the Hong Kong University of Science and Technology (HKUST) on 1 October 2020. He is also a Chair Professor of Mathematics. He joined the HKUST as the Head of the Department of Mathematics in 2014 and he became the Dean of School of Science in 2016.

Professor Wang is an internationally respected scholar with wide ranging research interests, having published over 100 research journal papers in both pure and interdisciplinary mathematics, many of which in top journals. During his tenure as Dean of Science and Head of Mathematics, Prof Wang founded the HKUST Big Data Institute and launched the popular Big Data Technology MSc program.

Professor Wang received his Bachelor degree in Mathematics from the University of Science and Technology of China in 1983 and obtained his PhD degree in Mathematics from Harvard University in 1990.  He started his academic career with the Georgia Institute of Technology in 1989 and then moved on to be the Department Chair and Professor of Mathematics at Michigan State University in 2007. He was also a Program Director at the National Science Foundation between 2006 and 2007.

Lik-Hang Lee received a Ph.D. degree from SyMLab, Hong Kong University of Science and Technology, and the Bachelor’s and M.Phil. degrees from the University of Hong Kong. He is currently an assistant professor (tenure-track) with the Korea Advanced Institute of Science and Technology (KAIST), South Korea, and the head of the Augmented Reality and Media Laboratory, KAIST. He has built and designed various human-centric computing specializing in augmented and virtual realities (AR/VR).

Carlos Astengo-Noguez is a Mathematician with a Master’s Degree in Applied Mathematics and a Ph.D. in Artificial Intelligence. He is the former Educational Innovation and Research Office Director and National Director for the faculty development and educational innovation center at Tecnologico de Monterrey, Mexico.
His research topics include Multiagent, Systems, ML, Pathfinding, Flock Traffic Navigation, Teaching /Learning Techniques, Gamification, and recent Neuroscience-based metrics. Carlos is an active member of the Monterrey Interactive Media & Entertainment Cluster (MIMEC) and participates actively at the APRU E-Sports working groups.

more
Professor Pan HUI
Chair Professor of Computational Media and Arts (CMA), Director of the Center for Metaverse and Computational Creativity, The Hong Kong University of Science and Technology (HKUST)

Professor Pan Hui is a Chair Professor of Computational Media and Arts and Director of the Center for Metaverse and Computational Creativity at the Hong Kong University of Science and Technology. He is an International Fellow of the Royal Academy of Engineering, a member of Academia Europaea, an IEEE Fellow, and an ACM Distinguished Scientist. He is also the Nokia Chair in Data Science at the University of Helsinki. He received his PhD from the Computer Laboratory at University of Cambridge, and both his Bachelor and MPhil degrees from the University of Hong Kong. He was an adjunct Professor of social computing and networking at Aalto University, Finland, and a Distinguished Scientist at the Deutsche Telekom Laboratories (T-labs), Germany. His industrial profile also includes his research at Intel Research Cambridge, UK and Thomson Research Paris, France. Professor Hui is a world-leading expert in Augmented Reality and Mobile Computing, with more than 400 research papers, 30 patents, and over 23,000 citations. He has founded and chaired many IEEE/ACM conferences/workshops, and has served as track chair, senior program committee member, organising committee member, and program committee member of numerous top conferences including ACM WWW, ACM SIGCOMM, ACM MobiSys, ACM MobiCom, ACM CoNext, IEEE Infocom, IEEE PerCom, IEEE ICNP, IEEE ICDCS, IJCAI, AAAI, UAI, and ICWSM. He served as an Associate Editor for IEEE Transactions on Mobile Computing and IEEE Transactions on Cloud Computing, and as guest editor for various journals including IEEE Journal on Selected Areas in Communications (JSAC) and IEEE Transactions on Secure and Dependable Computing. He also served on the IEEE Computer Society Fellow Evaluation Committee.

She has over 20 years of working experience in both the education and business sectors. Prior to joining USC, she was the Head of MBA Programs (student development and international programs) at the Hong Kong University of Science and Technology.

During her work in higher education, Etta has been broadly supporting students and young professionals from different nationalities, backgrounds, and cultures.  Recently she designs a program that applies design thinking to life and career planning.

Etta recently completed the Teaching and Learning Studio program at Stanford’s d.school.  She received her bachelor’s at University of Wisconsin-Madison and her master’s at HKUST.

Jim Huntley is a Marketing and Brand Management Executive with over 25 years of experience leading teams across multiple industries. After graduating from Northwestern University’s Masters of Marketing Communications program, he joined General Mills where he managed marketing and promotions on Betty Crocker Products, Lucky Charms, and Cheerios. He followed that with a stint at Nestle before transitioning into the toy industry and spending 4 years at Mattel, working on brands as varied as Hot Wheels, Barbie, He-Man, Max Steel, and Justice League. His success on Barbie brought him to MGA to work as their VP of marketing on their Bratz line, then transitioned into video games by taking a role at THQ. In his almost 5 years there, he served as Marketing VP on their kids products (SpongeBob, Disney’s Cars, Wall-E), and T/M rated titles like MX vs ATV, Space Marine, Homefront, UFC 2010, WWE, and Darksiders 1 & 2. He most recently relaunched the SodaStream brand in the US with a business transforming TV spot that is now being used globally, and is currently consulting for a variety of companies in the toy, consumer products, and gaming industries. He is also a Professor in the USC Games program at the University of Southern California.

Kathy Chiang is a veteran of the collegiate esports space, starting as a student organizer in 2012. Her experience with the grassroots scene led to an internship at Riot Games before she joined the Esports department at the University of California, Irvine as Assistant Director to develop the first official esports program at a public institution in 2016. Currently, she serves as Vice President of the Board of Directors for the Voice of Intercollegiate Esports (VOICE).

Nyle Sky Kauweloa is a PhD candidate at the University of Hawaii’s Communication and Information Sciences program. Broadly, his research interests are at the intersection of technology, society, and gaming. His dissertation work is an ethnographic study of the still-emerging scene of college esports in the United States, which included his doing fieldwork at the University of California, Irvine. His most recent writing on esports is a book chapter (“The Emergence of College Esports in North America”) for Global esports: Transformation of Cultural Perceptions of Competitive Gaming (2021). Outside of research, Mr. Kauweloa serves on the board of the Electronic Gaming Federation (a collection of 40 Division-1 colleges with esports programmatic investments), and the newly launched VOICE, a non-profit of college esports leadership in higher education.

Dr Yupei Zhao (PhD in University of Leicester, UK) is an “Hundred Talent Program Young Professor” and doctorial tutor in college of Media and International Culture in Zhejiang University. She is currently vice chair-elected of International Communication Association Popular Media and Culture Division, vice dean of Chinese Society for Science and Technology Jounalism in Game and eSports Communication Research Professionals. Co-founder of UK-China Media and Communication Association. Before joining ZJU, she was working as a senior research associate in school of Communciation and Design in Sun Yat-sen University. Meanwhile, Yupei Zhao has been invited as senior researcher in Institute of Asia and Pacific Studies, China Policy institute at University of Nottingham (UK), and the Eurasian Sport Industry at Emlyon’s Shanghai Campus, visiting professor in Xi’an-Liverpool University and Beijing Institute of Technology.

Her research interests widely includes mixed-methods use to examine digital culture and platformalization, global communication, media culture and industry. Particurly, she pays more attentions on eSports culture and industry, digital music and culture, fandom culture, media and platformalization. She has a PhD and MA focusing on Political Communication and New Media in University of Leicester (UK) since 2010 to 2016. Thus far, she is PI for twelve research funding projects, and her research has appeared in International Journal of Cultural Studies, Journal of Cultural Economy, International Journal of Communication, Social Science Quarterly, Sage Open, Social media + Society, Media International Australia, popular music and society etc. She got “The Best Paper” Paper Award in both 2020 and 2019 International Communication Association Popular Media and Culture Division, and 2019 European Association for Sport Management.

Patrick Williams (PhD) is Associate Professor of Sociology at Nanyang Technological University, Singapore. His primary areas of research are culture and identity, wherein he splits his time between the study of subcultural identity and authenticity on the one hand, and game-related experiences and identities on the other. Among his many publications, he has authored and edited several books on culture, identity and/or games, including Gaming as Culture: Essays in Social Reality, Identity and Experience in Fantasy Games(2006), Subcultural Theory: Traditions and Concepts(2011), and Studies on the Social Construction of Identity and Authenticity (2020). His current research focuses on the significance of DIY culture and identity in the growth of esports in Singapore.

James Yuen is a final year student majoring in marketing at The Hong Kong University of Science and Technology (HKUST) and is a former Hong Kong Wushu representative. As the awardee of the HKUST Sportman of the Year for two consecutive years, coupled with his passion and dedication for his sport, James is committed to promoting sports and culture to a wider community through innovation. With a belief in the digital economy, he is keen to explore the application of NFTs and the Metaverse. James is the community manager for Kung Fu Warriors NFT, and he is currently looking into gamification and tokenomics for the project.