Pacific Rim universities and the challenges of migration and diversity

UCLA hosted the 23rd Annual Presidents’ Meeting (APM) of the Association of Pacific Rim Universities (APRU) on June 23–25, 2019. Together with academic experts on migration and international public policy, these higher education leaders addressed — via keynotes and panel discussions — how best to respond to migration in the Asia-Pacific region and its relation to climate change, social justice concerns, the drive for equity and diversity on university campuses and rising barriers to international collaborative research.Created in Los Angeles in 1997 and boasting some 50 members, APRU is a network of leading Pacific Rim universities that engages in collaborative policy research, high-level exchanges and partnerships.

Gene Block, APRU chair and UCLA chancellor, welcomed over 130 educators — including 24 university presidents, together with senior university leaders and other academics — from 17 Pacific Rim economies to the meeting, entitled “Universities in an Age of Global Migration.”

The three-day meeting included a presidents’ working luncheon with remarks by President Se-Jung Oh of Seoul National University and Rector David Garza of Technológico de Monterrey (Mexico), a strategy session and presidential forum on equity and diversity, as well as business meetings on University e-Sports and the Asia-Pacific Women in Leadership initiative.

As part of the APM, a UCLA Centennial Dinner celebrated UCLA’s past 100 years with messages and videos about how the university began, its next 100 years and its public service mission, as well as performances by the UCLA Global Jazz Studies Quartet. 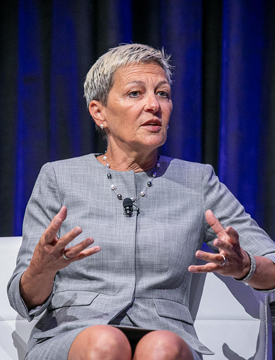 Suzanne Boda, senior vice president of American Airlines, gave a keynote address about how the United States had been formed by people who migrated globally, noting that diversity, inclusion and equality led to better decision making. “We need globally minded people in the work force,” she said, emphasizing the reality of diverse employees who come from many backgrounds and speak many languages.

Boda urged universities to broaden students’ horizons through required coursework in languages and other cultures, international student exchanges and functioning as safe havens for immigrant students. Education, she insisted, should instill a sense of understanding and celebration of differences. “These are the people who American Airlines wants to hire,” she remarked. 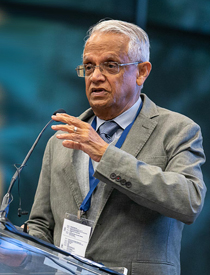 Ramanathan noted that climate change is producing climate disruption, which will directly impact public health via increased water shortages, cardiac and respiratory disorders, contagious diseases, depression and trauma, among other things. He argued that enormous investments are needed to enable scalable solutions for controlling climate change to succeed. Noting that nations were not taking sufficient action because of a lack of public support, the Scripps Institute oceanographer urged universities to play a bigger role in translating scientific research on climate change into action plans, citing his own “Bending the Curve: Climate Change Solutions” curriculum to empower one million climate champions across the world to reduce global warming. 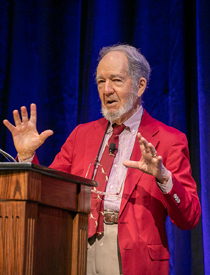 Pulitzer Prize-winning author Jared Diamond, professor of geography and physiology at UCLA, delivered the final keynote address on immigration policies in seven countries worldwide. He noted that cultural, historical and geographical factors influence nations’ immigration policies over time, including their ability to adapt to changing circumstances — whether such circumstances are migrant flows or rapidly aging populations.

Professor Diamond predicted immigration would increase in the future as the result of demographic factors alone, and encouraged universities to create centers on migration. Cindy Fan, co-chair of the APRU International Policy Advisory Committee and UCLA vice provost for international studies and global engagement, shared UCLA’s experience in creating a special advisory council on immigration policy and an interdisciplinary center to study migration.

Universities should engage in the immigration debate not by taking sides, but by providing reliable data, said UCLA Chancellor Block. Universities, he said, are well positioned to provide data that can both disprove fallacious arguments and better educate citizens on the benefits and costs of legal and illegal migration.

Block emphasized the tactical problems that U.S. universities face with respect to DACA students. These undocumented students are protected by Deferred Action for Childhood Arrivals (DACA) status, he explained, but loss of that status — which the Trump administration is considering eliminating — could result in their deportation. At present, UCLA provides these students advice on how to handle immigration inquiries and helps raise funds for at-risk individuals.

President of Tecnológico de Monterrey David Garza observed that current migration flows were affecting Mexico in unprecedented ways. Immigrants from Central America and across the world are now trying to enter the U.S. through Mexico. Many will remain in the country, he said, presenting Mexico and its universities with new challenges.

President of the Chinese University of Hong Kong Rocky Tuan believed it is possible for universities in the territory to handle a diverse mix of cultures (students hail principally from Hong Kong, mainland China and countries worldwide) without such exchanges blowing out of proportion. He identified cultural approaches in particular as a promising strategy for navigating the social and cultural impacts of immigration.

Some 40 percent of faculty at the California Institute of Technology were born outside of the U.S., a percentage that is roughly equal to the number of foreign students at Cal Tech, said Institute President Thomas F. Rosenbaum. Mentioning the recent firing of Chinese scientists from several U.S. universities, the Cal Tech president worried that U.S. restrictions on research and technology sharing could become governmental over-reach — one that could potentially diminish valuable transnational collaboration and slow advances in science.

“Knowledge is not effective if constrained in box,” said Rosenbaum, arguing that research values and modes cut across national boundaries. Ian Jacobs, president and vice chancellor of the University of New South Wales, concurred, noting that intellectual property rights protections had become a big issue at Australian universities at a time when the country’s largest trading partners are in Asia.

Jacobs noted that increased numbers of students from Sri Lanka had come to study in Australia, leading to positive cultural change in his country. Yet Australia today is experiencing social pushback against foreign students. Jacobs urged university leaders to stand up to social resistance to international students on their campuses, calling on them to explain that their responsibility is not simply to “the nation,” but to the world.

Vice Chancellor and Principal Michael Spence of the University of Sydney said that people of non-European heritage now make up 21 percent of the population of Australia, but only 4.7 percent of government leadership. He identified linguistic and cultural diversity, not gender, as the country’s chief challenge. To successfully promote this diversity, universities need coherent policies and not “add-ons” to existing policies, he added. UCLA Vice Chancellor for Equity, Diversity and Inclusion Jerry Kang shared policies precisely along these lines that aim to ensure the faculty hiring process seriously considers diversity in candidate pools.

Spence noted that the University of Sydney was preparing students for an uncertain future and trying to model a community of discourse for that future. One component of that discourse is checking stereotyped assumptions about other cultures, he said. Labeling such stereotyping “intellectual laziness,” Spence pointed out that the practice adversely impacts the performance of minority students.

Many universities face barriers to increasing the number of international students on their campuses, but are able to increase diversity in the student body by other means. For example, the government in Taiwan limits international students to 10 percent of the student body, said Executive Vice President of National Taiwan University Chiapei Chou, but the number of international exchange students is unlimited. Of note, said Chou, increasing numbers of Taiwanese students are going to South and Southeast Asia via study abroad programs.

It became clear that countries of the Pacific Rim are dealing with different types of migration. Rosa Devés, vice president for academic affairs at the University Chile, said that Chile was experiencing rapid immigration flows from Colombia, but that the education system remained highly segregated by nationality at the school level. In Japan, where the population remains largely homogenous, universities are making efforts to give their students greater exposure to and appreciation of other cultures, said Hideo Ohno and Aiji Tanaka, presidents of Tohoku University and Waseda University, respectively.

The gender equity challenge in Asian universities remains steep. For example, Tohoku University President Hideo Ohno noted that only one-quarter of students at Tohoku are women, and only 14 percent of its researchers. Santa Ono, president and vice chancellor of the University of British Columbia, noted that that university statements alone on gender equity were insufficient, arguing that real change would require resources. 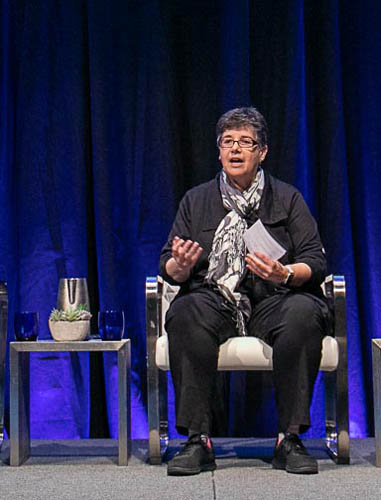 Ana Mari Cauce (president, University of Washington) emphasized that while diversity was not a moral obligation, it was critical to excellence. “Diversity inspires,” she said, “You’re the face — you are a president and a woman, not a woman president.” To achieve improved management diversity, she urged universities to start with senior leadership positions while building a pipeline for future hires.

“Diversity is inclusion, not exclusion,” she said, dismissing the idea of a prohibition against hiring men as violating the spirit of diversity. Cauce stressed that one critical component of diversity should be supporting students of lower socioeconomic status, recommending that APRU focus specifically on helping international students from low-income backgrounds.

After a busy three days of discussions, the Annual Presidents’ Meeting closed with a re-affirmation of APRU’s commitment to international student and researcher mobility, collaboration and cooperation.

All photos by Reed Hutchinson.