A new genome-sequencing study by CUHK biologists has uncovered the hidden genetic histories that explain differences in the behaviour and diets of centipedes and millipedes. These surprising evolutionary insights could help scientists better understand the vital ecological roles that these creatures play in sustaining and restoring natural ecosystems. The findings were reported in the prestigious scientific journal Nature Communications.

Centipedes prey on insects and other invertebrates, while millipedes feed on leaf litter and other decaying organic matter. Both belong to a group of invertebrate animals called myriapods, which means ‘10,000 feet’ in Ancient Greek and includes about 16,000 extant species. Myriapods perform many crucial ecological functions, including recycling nutrients in the soil and keeping forests healthy. Despite their importance, however, myriapods are relatively understudied compared to invertebrates that share similar features, such as insects, arachnids and crustaceans.

A fork in the family tree

In a major advance for myriapod knowledge, a CUHK team has now sequenced the whole genome of nine centipede and millipede species, creating high-quality reference genomes that constitute the world’s first myriapod gene repertoire analysis. These genomic studies revealed several unexpected gene alterations that led to the different adaptive pathways followed by centipede and millipede lineages after their divergence from a common ancestor, according to Prof. Jerome Hui of CUHK’s School of Life Sciences.

‘This remarkable divergence has led to two very different lifestyles being expressed in extant myriapods: predation in centipedes, characterised by the evolution of offensive chemical weaponry in the form of venom, and a detritivorous diet in millipedes,’ explains Prof. Hui. ‘We provide the first steps towards unravelling the genomic bases of the divergent adaptations underlying these two lineages with very different ecologies.’

Prof. Hui was part of the consortium that published the first centipede genome. He has led a research team working on myriapods since 2013 and published the first millipede genome. This latest study provides a firmer foundation for further basic and applied research on myriapods, which in turn can contribute to studies of biodiversity and ecology. 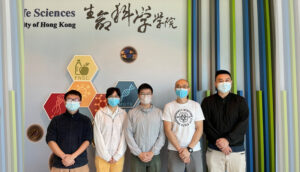 Prof. Hui added, ‘In the near future, in addition to continuing to explore the hidden biology and genomics, we need to fully understand the ecological roles in soil and forest ecosystems of this fascinating yet neglected group of organisms. Hopefully one day we can better understand these life forms on land, the effects of climate change on them and their contribution to nutrient recycling, and perhaps eventually achieve zero hunger via agricultural applications.’

Prof. Hui is Co-chair of the new Biodiversity and Pacific Ocean Programme of the Association of Pacific Rim Universities which seeks to promote collective action to address biodiversity loss, protect ecosystems and combat the impacts of climate change. Co-leading the initiative with the University of Sydney and the University of California, Davis, other members include Universidad de los Andes, University of Malaya and University of the Philippines.

Read more: CUHK builds a genome bank of myriapods offering clues to the divergent behaviours of centipedes and millipedes