To address the gender imbalance in university leadership, the Association of Pacific Rim Universities (APRU) created a mentoring program for mid-career female faculty. UCLA leaders and professors have been active participants in the program since its inception in 2020. 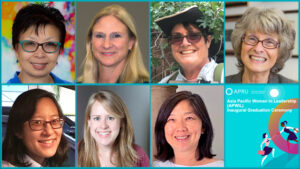 “The Asia Pacific Women in Leadership (APWiL) Mentoring Program has been invaluable for me,” says Derjung Mimi Tarn, M.D., professor of family medicine at the Geffen School of Medicine at UCLA.

“The program created a safe space to discuss struggles and successes that are pertinent to women, and provided a wonderful opportunity to learn from prominent female leaders. Unfortunately, the problems faced by women in academic medicine are not isolated to one university or country, but are shared globally,” added the doctor, who also has a Ph.D. in health services.

“This mentoring program gave me the opportunity to develop a global support network, to learn about the unique challenges of those from different countries and cultures and to reflect on how to build on the experiences of others in my own leadership roles.”

Tarn was one of three UCLA representatives to participate in the initial APWiL Mentoring Program pilot year (2020–21), which paired 15 mentors with 15 mentees at 10 of the 61 member universities of the Association of Pacific Rim Universities (APRU).*

Margaret Peters, associate professor of political science at UCLA and a member of the current APWiL cohort, comments, “I am greatly enjoying working with my mentor, Mark Edele, who is at the University of Melbourne [Hansen Professor of History and deputy associate dean, faculty of the arts]. He has provided great advice and it is very interesting to learn how different universities function around the world.”

APRU is a network of leading research universities located on both sides of the Pacific that facilitates the exchange of ideas and collaborative research to devise effective solutions to the challenges of the 21st century.

UCLA is a founding and active member of APRU. Chancellor Gene Block is the current APRU chair, Vice Provost for International Studies and Global Engagement Cindy Fan is former co-chair of its International Policy Advisory Committee and in 2019, UCLA hosted the 23rd APRU Annual Presidents’ Meeting as part of its Centennial Celebration on campus.

The APWiL Mentoring Program was created in 2020 as part of a larger strategy to close the gender gap and give diversity efforts greater traction across APRU member institutions.

The program is co-chaired by Joanna Regulska, vice provost and dean of global affairs at UC Davis, and Sabrina Lin, Ph.D., senior advisor to the president of Hong Kong University of Science and Technology (HKUST), former HKUST vice president for institutional advancement and a veteran of the IT industry. (See a recent op-ed by the co-chairs on the impact of the pandemic on women in academia.) Day-to-day program operations are managed by Kimberly Bellows and Chelsey Hawes of UC Davis Global Affairs.

“I am inspired by the conversation among women of APRU member institutions about the challenges we face, but more importantly, by the opportunity to engage in intercultural and collective effort to support women’s leadership in our institutions,” said Regulska.

“Advancing women’s empowerment and global engagement are my two most critical commitments, and this program offers both. The fact that just in the second year of the program existence we have tripled participation speaks volumes to the need for such global conversations, but also interest on the part of women and the commitment of their institutions to advance women’s leadership,” she added.

UCLA Vice Provost Fan and Christine Dunkel Schetter, distinguished professor of psychology and psychiatry and associate vice chancellor of faculty development at UCLA, participated as mentors during the program’s pilot year. Fan worked with Surabhi Chopra, associate professor of law at the Chinese University of Hong Kong, who had worked as an attorney in nonprofit organizations before starting an academic career.

“I can honestly say that, without the many mentors in my professional life, both men and women, I would not have aspired to senior leadership in academia,” said Fan at a graduation ceremony for the first APWiL cohort. 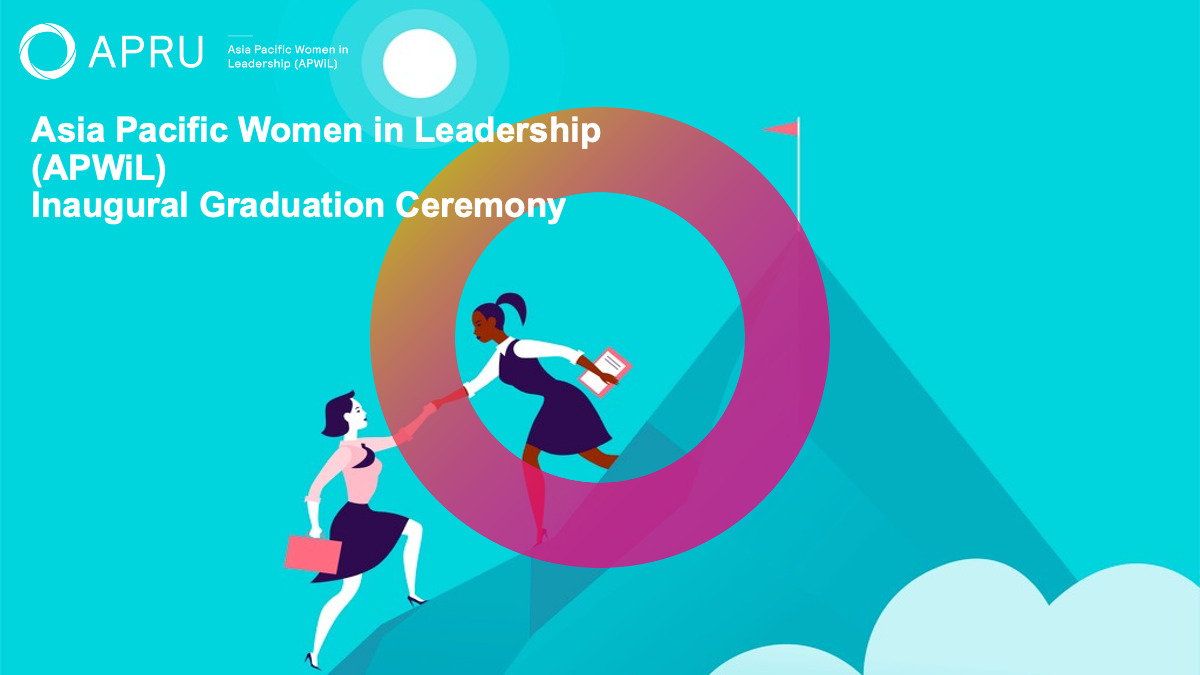 Recognizing the difficulties of gaining traction

In remarks to the first cohort of APWiL mentees last fall,** Dawn Freshwater, vice chancellor of the University of Auckland (New Zealand), highlighted the lack of improvement in the number of women university leaders at APRU member institutions in the preceding half-decade (see “2019 APRU Gender Gap Report”).

In a similar vein, Fan pointed to findings from a 2017 publication of the American Council on Education, which documented that women have earned more than 50 percent of all doctoral degrees in the U.S. since 2006, but as of 2015, held only 32 percent of full professorships in U.S. degree-granting institutions.

Freshwater — like Fan, a first-generation college graduate who became a university leader — stressed the importance of informal leadership for changing organizational culture. “[I]n my experience, policies are one thing… but their existence alone isn’t enough. Policies must be implemented by their leaders’ commitment to their purpose and they can only be successful where there is an environment and organizational culture that supports them.

“[W]hat I have witnessed and experienced is that good intention without meaningful interaction and meaningful engagement across the whole of the institution is irrelevant. So, for me, I focus as a leader on building culture.” Effecting change requires consistent focus, she emphasized.

Gender equity in universities is more imperative than ever, given the impacts of the global coronavirus pandemic on young female academics, said Freshwater. “As leaders we must act to ensure careers are not permanently scarred by COVID-19 disruptions. We know that early-stage female researchers are some of the most seriously impacted members of our university communities as a result of the pandemic.

“Their work has had to be put on hold as lockdowns forced them home and to full-time childcare and home responsibilities. Research output for women has… decreased, especially for women with children under the age of five, and systemic racism faced by women of color has worsened.”

Whether universities are responding to the gender and equity gap, the climate crisis or the pandemic, Freshwater said, “Diverse and inclusive leadership holds the key to meeting these challenges for the future.

APWiL co-chair Sabrina Lin identified another key component in advancing women into university leadership: male allies. “Without the advocacy of our male allies, I think it would be very difficult to improve diversity overall,” she said.

UCLA participants weigh in on the challenges

As APWiL Co-Chair Regulska noted, the mentoring program has tripled in size in its second year, with 87 participants across 26 APRU member universities. UCLA participants in the 2021–22 cohort include mentees Margaret Peters and Yuen Huo, professor of psychology; and mentors Janina Montero, vice chancellor-student affairs emerita, and Victoria Sork, distinguished professor of ecology and evolutionary biology and former dean of life sciences.

Several of these participants, together with Vice Provost Fan and Dr. Derjung Mimi Tarn of the program’s first year, shared their thoughts on some of the priorities identified by Freshwater and Lin. 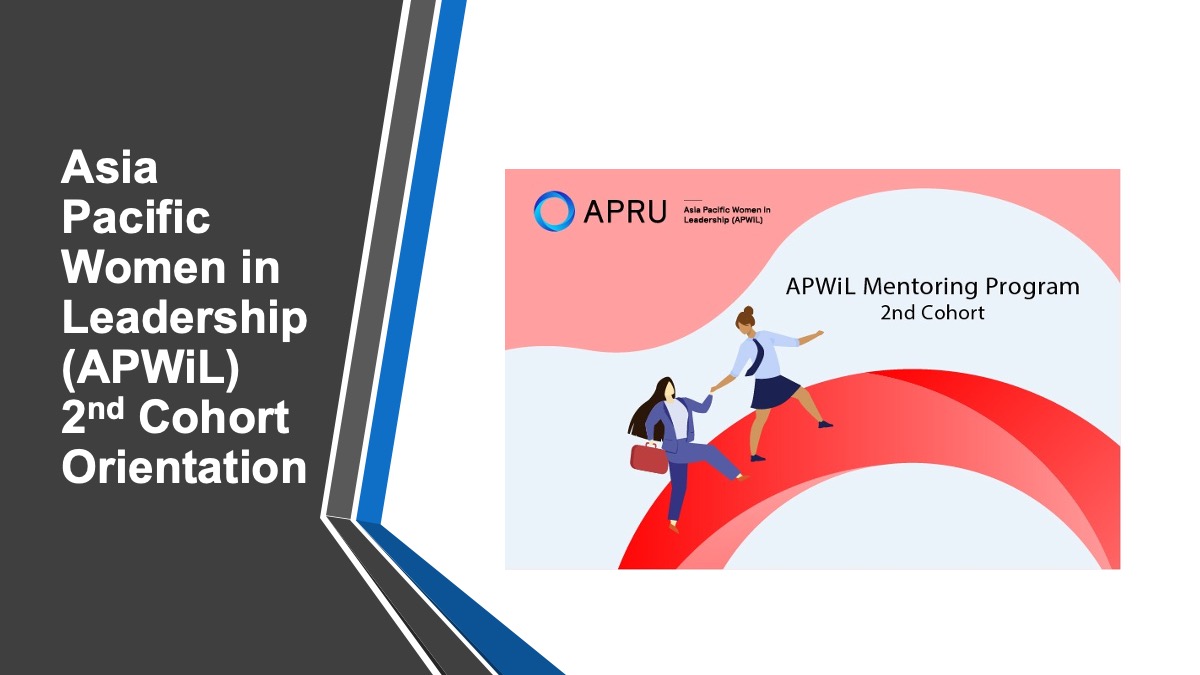 APWiL held an orientation for its second cohort of mentors and mentees in early November 2021. Graphic courtesy of APWiL/ APRU.

The pandemic has hit women academics in medicine particularly hard, said Tarn. “Female researchers have definitely been disproportionately impacted by the pandemic. Women have had more work-life conflicts than men, and more are suffering from depression.

“Among physicians, gender disparities in mental health have increased. Without immediate intervention to mitigate the effects of the pandemic on these young researchers, many who would otherwise have been successful will end up leaving academia.”

Peters concurred, “This is a very important issue right now for all academic parents, but especially women, upon whom the burden of caregiving usually falls.

“It is great that UCLA is providing more funding and providing clock extensions, but I think more needs to be done,” she continued.

“I constantly hear about faculty who are thinking about leaving the profession because they are burned out, having had little time for research. I think the university should think about providing additional sabbaticals for those who have suffered a disproportionate impact due to their care duties during the pandemic.”

On the need for male allies, Tarn remarked of her experience in medical academia, “I can’t say enough about them. They are critical to improving diversity and gender equity. My strongest and most effective supporters have been male faculty members who stood up for me and supported me during my career.

“I have had strong female allies as well, but often other men were more receptive to the thoughts and opinions of other men [i.e., male allies]. Without these supportive men, I would likely have left academics early in my career.”

Huo, a current program mentee, agreed. “This effort should not be a ‘woman only’ issue. Initiatives and policies to support women can be most successful if people at the institution — men and women — work to change norms.

“What resonated with me is hearing UBC President Santa Ono (a male ally) mention that men have historically nominated each other for awards and positions and that in his TED talk, he started the hashtag #nominateher to encourage both men and women to promote talented women in higher education. I think that’s an exciting movement.” (President and Vice Chancellor of the University of British Columbia, Ono is the current APWiL presidential champion.)

Janina Montero, whose long and distinguished career in student affairs included the creation and management of enduring mentorship programs, noted that one of her greatest mentors was a male professor.

“I don’t see women as being the only ones who can provide career guidance and a push to other women. But we have more direct experience — we’re the ones that bear the children, if you will — and that affects the way we do our work,” she commented.

“Women who have families or who have both a job and a set of personal responsibilities — there’s a degree of juggling, really wrestling with more than juggling, those multiple demands. 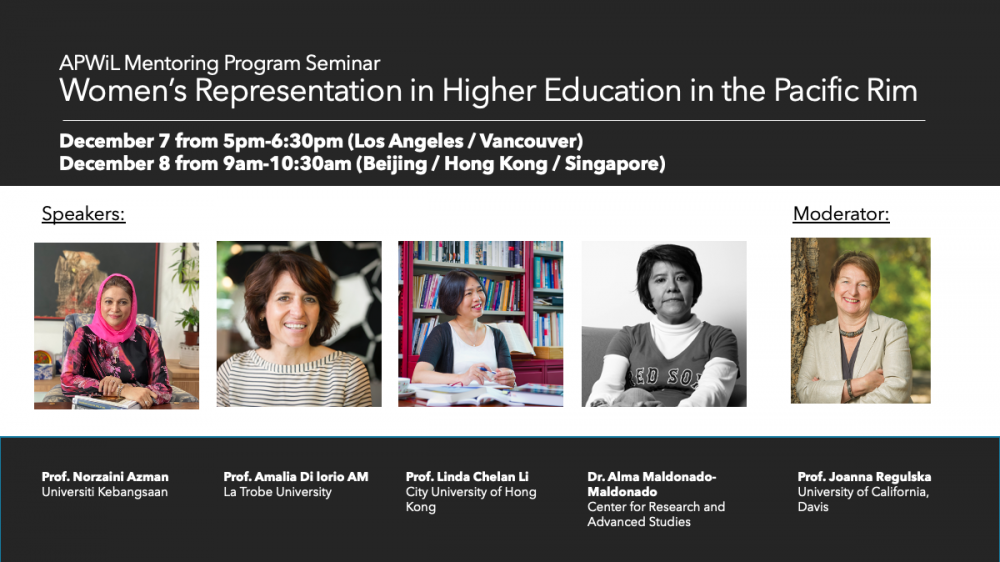 In its second year, the APWiL Mentoring Program began offering online seminars to current and past program participants and created a private website where they can interact and share information. Gracphic courtesy of APWiL/ APRU.

With respect to organizational culture, former UCLA mentee Tarn reflected, “Informal leaders can be instrumental in cultivating supporting environments. Women need trusted informal leaders who they can approach for support and advice.”

Montero commented, “I think there has been progress in organizational culture, but I think we all need to be thinking in more inclusive ways. For example, if there are no women or no people of color applying for a position, ‘Nobody applied’ is no longer the answer.

“I go back to the structural reality. What do you want your hiring pools to look like? What opportunities do you give your faculty? Who are you giving opportunity to, in terms of conferences, committee work and exposure? Are you paying attention that if today you give it to Peter, are you going to be sure to give it to Sally or Molly the next time?

Montero stressed that to be effective, a commitment to equity and diversity must be present at all levels of management of a university — “not only among the obvious leadership, but also among boards and trustees. If they don’t see the value in these goals, that will permeate the pyramid and the culture.

“Diversity is never a one-way street. It’s stunning how much a diversity of voices — especially if you give people the opportunity not to be there just as a potted plant, but to contribute — produces an outcome that is infinitely better than a more homogeneous approach.”

** To view the video of the pilot program graduation ceremony, copy and paste this link into your web browser: https://bit.ly/3JrGPcv.

Read the APRU article on the second cohort of the APWiL Mentoring Program here.